Yesterday, a coworker and I made our way to the cafeteria for lunch.  As I was deciding on what I wanted to eat...a woman I'm very familiar with asked me if she could talk to me in private.  'Sure,' I replied.  I was taken aback because her facial expression was so enigmatic, I couldn't get a bead on what it was she wanted to talk to me about.

Still, I waited with baited breath to see what it was she wanted to talk about.  Alas, she began her story by telling me she was on the floor getting her charger so she could charge her phone.  When she had risen, she began to pray for me.  And then she saw me speaking ( I thought that meant she had a vision). I queried, 'Who was I speaking to?'  She said 'a woman.'  It wasn't a 'vision' she'd had- I realized she was referring to this interview.  She was flipping through the channels and saw me doing an interview with one of our local Atheist groups.

She then said she prayed for me, I said..'oookkk.'  She went on to say she had a message for me and to remember, she's just the 'messenger.' I knew where this conversation was going.  I was told that 'god' (I'm assuming the xtian god), still loves me and that I was 'one of his finest.' 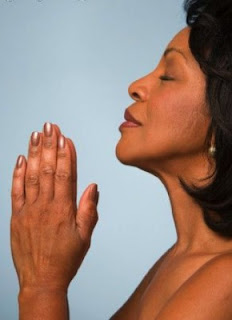 Probably in any other context, I would have effusively thanked her-but it took every ounce of energy to maintain my facial expression.  I've known this woman for six years and she's always had my best interest at heart. However, when I was told (by her) that it was 'deadly' for her to deliver the message to me...something in me chipped away.  I looked at her and said, 'ummm...ok message delivered.'

It was sad in a way, because fear overcame her when she said it was 'deadly' for her to deliver the message to me.  I mean, wth was I supposed to say??  It also, brought to mind what I must have looked like when I claimed to be one of the xtian god's mouthpiece.  Throughout the day, yesterday, I was brought to sadness.  I felt sorry for my friend, because she not only feared for herself, it was obvious she feared for me.

I politely allowed her to finish speaking and she ended the conversation by saying, I looked pretty. :)

I am and will always be an Atheist. I'm not god's finest, but I assure everyone-I'm doing just fine!
Posted by BeautifulBlackAtheist at 11:48 PM No comments:

BeautifulBlackAtheist
I mean really..what the hell am I supposed to say to your nosey ass?? lol I'm a lil ol' black lady in the Midwest with a lil too much time on her hands. I'm really into my positions as grandmother (yes, I don't look like a grandmother, I know lol) and an atheist. Those two facets of my life are extremely important right now. If you're looking for some pseudo quasi scientist to talk about quantum/particle physics, ur shit out of luck! I can tell you why I'm an atheist and how it's impacted my life. #shrug Otherwise, ask me questions that aren't scientific lol